The Midnight Rile We All Must Hear

Listen, dear voters, and you shall hear
Of the kinds of surprises politicos fear.
In the month of October, in Zero-Sixteen
Hardly any evidence remained still unseen.
Who can forget that famous vid-e-o?

One candidate said to his friend, “I’m a star!
I’m rich! And they’ve all seen me on the TV.
I really just don’t care who most of them are --
I put out my hand and I grab their p***y.
One if by jet, and two if by bus
There’s more than enough chicks for the two of us.
Ready to grab and cause great alarm.
I want them for sex; they’ll succumb to my charm.
When that fails, then Tic-Tacs I use to disarm.”

He sort of apologized – then with hair a-flutter
Returned to the trail, launching yet more attacks.
But all of a sudden one more, then another
Made claims that, in years past, consent he had lacked.
He said, “All are liars! I never molested!
I’ll sue! I will win once my case has been rested.”
The clamor distracted from what John Podesta'd
Allegedly said, since his emails were hacked.

Meanwhile, his opponent, through every device
Sent emails without confidentiality.
Totally disregarding sage advice,
And claimed to not know the meaning of “C.”
First she denied it, then she proclaimed
In hindsight she should have accepted some blame.
Yet nothing was criminal – Comey said the same.
But just when we thought a review had been thorough
A new warning came from the Federal Bureau.

While following up on the trail of a sexter
Who shared a device with her closest aide,
The FBI found more emails sure to vex her.
This scandal was one that would not go away.
No sooner would Hillary claim, “All is well!”
Then some revelation would bring a fresh hell.
Over and over, it was a tough sell.
She’d battled; established a lead with the electorate
But doubts of her trustworthiness may have wrecked it.

On through the campaign trudge Hillary and Donald
With near every night yet another reveal.
Claims from yet one more woman he fondled;
Money her foundation may have concealed.
A voice in the darkness, a knock at the door,
His claim if she wins – Second Amendment no more.
She says he’s unqualified, dangerous to boot.
If he wins, she says our society will uproot.
In this hour of darkness and peril and need
The people will waken and wish they could hear
A message of hope, an inspiring creed.
Instead of this campaign that generates fear.
We want inspiration – we get rant and rave.
While patriot Paul Revere spins in his grave.

Using Every Employee in the Book

Here's the seventh article in my series: "Tell Your Disruptive Business Model To Quiet Down Or Else We're Going To Have To Ask The Two Of You To Leave."

Today's installment offers templates for workplace policies addressing the most common employee issues you encounter. You are welcome to make use of these at no cost. Well, I say "at no cost" but believe me -- if you implement any of these you'll certainly pay in the long run.

RESPECT IN THE WORKPLACE

We do not tolerate any harassment based on gender, age, race, color, national origin, ancestry, sexual orientation, gender identity or expression, pregnancy, physical or mental disability, and religion.

That doesn't leave you much to choose from (all that's left: outdated hairstyle; annoying speaking voice; height or lack thereof), so choose your moments with precision, make your digs small and sharp and then -- walk away; don't look back.

Each employee is an important contributor to the company's mission (we have to say this) and each employee is needed at work to assist in the accomplishment of the company’s goals and objectives -- whatever they may be; I've misplaced my little wallet-sized card that spells them out. Absenteeism can lower the morale of other employees who have to perform the work of the absent employee. (Except when that guy from Marketing with the horrible b.o. calls out -- everyone breathes a sigh of relief.)

Daily attendance is an expectation of all employees -- other than members of the Leadership Team, who spend three out of every four weeks either at a convention in Las Vegas or an "off-site" on St. Simons Island.

Emergency time off is offered to employees for such unscheduled events as personal illness (real or imagined), immediate family member sickness (which does not include your cousin who is "like a sister" to you), and doctor appointments (which always seem to require you to leave work right after lunch and take the rest of the afternoon).

We expect employees to dress appropriately in business attire. Because our work environment sees frequent visits from customers, clients, the public and investigators from the SEC, professional business attire is essential to keeping up the charade.

Business attire for men includes suits (but please avoid sharkskin; see "SEC" in the preceding paragraph), sports jackets, and pants that are typical of business formal attire at work (as opposed to business formal attire worn around the house over the weekend). For women, business attire includes pant and skirt suits and sports jackets appropriate to a formal business attire environment, along with an unruly and overly-shiny pin affixed to a lapel. For those who are gender-fluid -- we just throw our hands up in the air; it's your call so please don't sue us. Regardless of identity: underwear is always required and preferably worn next to the skin.

Employees are expected to demonstrate good judgment and professional taste. Of course, expectations here are very low and therefore we often let it slide when someone wears flip-flops or black shoes with brown socks.

INTERNET AND EMAIL USE

Voice mail, email, and Internet usage assigned to an employee's computer or telephone extensions are intended solely for the purpose of conducting Company business. But we all know the road to hell is paved with good intentions.

Online shopping, gaming, watching streaming media such "Game Of Thrones," wagering on fantasy sports websites and viewing pornography are examples of behavior that must be handled discreetly and only when you think no one else is watching.

Company employees may date, develop friendships and relationships both inside and outside of the workplace as long as the relationships do not negatively impact work. However, the Company discourages employees from having relations inside of the workplace; that's not what the "Mother's Room" is for. Any relationship that interferes with the company culture of teamwork, the harmonious work environment or the productivity of employees, will be addressed by applying the progressive discipline policy. Any relationship that results in daily drama at the level of a soap opera will be gossiped about and result in the use of separate tables in the cafeteria for the convenience of "us" versus "them."

REPORTING VIOLATIONS OF THESE POLICIES

Any employee who witnesses or is victimized by a violation of company policy is encouraged to snitch report it without fear of retribution. You can anticipate retribution; just don't fear it.

Employees wishing to make such a report anonymously are kidding themselves can call the Company Hotline at 1-888-FULL-VOICEMAIL. However, use of a personal cell phone during working hours is a violation of company policy and will result in disciplinary action up to and including being pelted with overripe tomatoes, or being assigned to a project doomed to fail until you decide to resign in order to "pursue other interests." We wish you well in your next endeavor.
--
Your electronic signature here indicates your acceptance of and commitment to blind obedience with these policies. Additionally, you are also waiving your right to sue, seek remediation, request restitution or other redress, or drop the f-bomb in response to anything that happens in the workplace.

Welcome to the team! 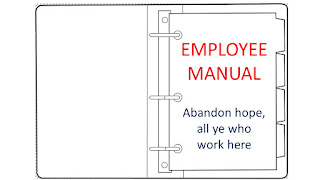 Posted by Unknown at 1:47 PM No comments:

Our good friends Bert and Marsha came up for a visit this past week. We were celebrating a number of special occasions -- Bert's 60th birthday; his retirement at the end of the month; our long-standing relationships, both singly and as couples.

Plans for our time together included, as always, enjoying good food, wine and beer, the resumption of a decades-long tennis rivalry between Bert and myself, and our wives getting their chakras aligned during a yoga session. After spending the weekend at our place we'd drive to Acadia National Park for a few days of sightseeing, bolstered with some shopping in the various quaint towns on Mount Desert Island. Here's the chronicle of our action-packed time together: 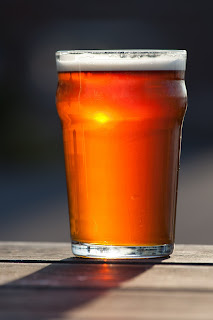 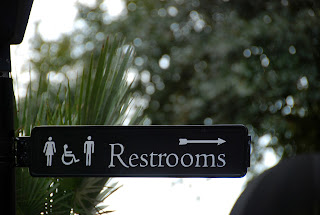 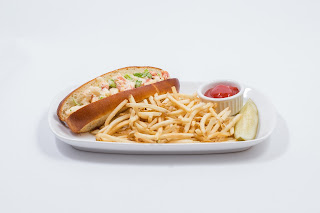