These Oscar predictions are guaranteed to be 100% correct


The Academy Awards are this Sunday. Here are my frighteningly accurate predictions:

I’m In Charge Here, All Appearances To The Contrary

Hello there, black lady - are you a reporter?
That seems out of order with how things should be.
I said inner cities are bleak, filled with carnage.
(We'll get back to leaks.) What is this "CBC"?

I thought for a moment that you were addressing
The raids where we're picking up hombres so bad.
So what if they're mothers? They should have thought through it
Before having kids who are left behind. Sad!

But anyway, let's get back to your suggestion.
Could you ask your friends when they'd all like to meet?
I figure you know them, because of your color.
When I see a black, you know -- I cross the street.

I'd love to confer with this so-called "black caucus."
I'm happy to meet with them -- it'll be swell!
I'll bring Dr. Carson; you'll bring Frederick Douglass.
We'll talk about how inner cities are hell.

The murder rate - up! It has never been higher.
I even once threatened to shoot someone dead!
Next month we're announcing a brand-new department:
We're calling it "Pre-Crime," which Tom Cruise will head.

My people have told me my win was historic.
Anyone says something else -- that's fake news.
I only know what I am told by Steve Bannon
(who mentioned the Holocaust wasn't just Jews).

The mess I inherited, I'm going to fix it.
Obama and Hillary, they're both to blame.
Ignore all the haters; there really aren't any.
The dishonest press makes them up. That's their game.

I've done more in 4 weeks than others in decades!
My team runs the show like a fine-tuned machine!
The people want vetting, and borders, and tax breaks.
But justice for all -- nope, not that; that's obscene.

I won and I'm here and you'd better accept it.
I'm going to do what I said I would do.
So screw the Resistance, and death to the leakers.
Excuse me now -- Putin's on hold on Line 2. 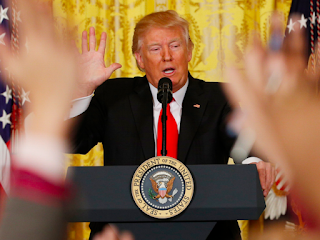 Are there nuclear codes for launching an f-bomb?

When our son Josh was in the eighth grade, he came home from school one afternoon with his report card. "How'd you do?" I asked. He hung his head for a moment and then said, "I got six 'A's and one grade I need to talk to you about." While I really would have preferred to focus on the six stellar assessments, I told him to proceed with his tale of woe, which was that he'd gotten an "F" in English. "How could you fail English?!" my wife protested. I advocated for a calmer response, suggesting perhaps his intention was to replace mastery of his native tongue with proficiency in a new language. Carol looked at me, not saying a word but with a glance that spoke volumes, then turned her attention back to Josh and again demanded, "How could you fail English?!" I was hopeful that Josh would demonstrate his mastery of, perhaps, French, and explain to his mère that he understood she had just issued a plaintive cri de coeur, but une seule langue n'est jamais suffisante. 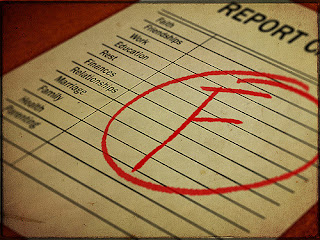 That did not prove to be the case. Josh received the failing grade because he didn't turn in a project about common grammatical and spelling errors. The sidebar here is that I met with his teacher and convinced her to let him hand in the assignment late, and she in return would adjust his grade for the semester to a minimally-passing "D" as long as he met all the report's requirements. He did, and she did, and that's the closest our son ever came to getting straight As in his entire academic career.

The reason I relate this tale is to lead into a discussion of some of those sticking points of grammar that he (meaning, "Me, standing over him with a whip in one hand and sharpened stick in the other") included in his finished paper. Even though this incident happened years ago, I continue to see people making these same mistakes. While I recently called my senator to strongly express my objection to Betsy DeVos becoming Secretary of Education (hashtag resist), if she can get our children (or even just our President) to understand the difference between "lose" and "loose," I'll continue to protest her appointment but will no longer drop any f-bombs while doing so.

Here are some of those grammatical conundrums from Josh's long-ago assignment, and my current-day attempts at un-drumming them:

➤ What is the difference between less and fewer?
➤ When should I use their versus there?
➤ Does it matter if I use your instead of you're?
---
Josh did go on to study French in high school, and as a result knows most of the major swear words en français, along with slang for certain body parts. I know this because I've heard him express himself thusly over the years. You know what they say about the study of language: Use it or loose it.
Posted by Unknown at 5:59 PM No comments:

After some fits and starts, this winter has finally come to life with a vengeance rivaled only by the Democrats during the Trump cabinet nominee hearings. During this most recent spate of storms, many of us Mainers run the risk of losing power (something the Dems are also struggling with). You've got big plans for the evening and then suddenly... the electricity is gone (again with the Dems). "What do I do now?" you moan, quoting Hillary Clinton the day after the election results were announced.
When the power goes out, you risk the loss of expensive groceries in your refrigerator and freezer. But if you follow the tips I list here, you'll save your victuals and make meals that will bring you almost as much joy as Mike Pence is feeling these days while realizing he's just weeks away from having to drop the "V" from his title.

I hope you find some of these suggestions helpful. By the way, I authored these recommendations by adopting the Republicans' approach to replacing the Affordable Care Act -- I had years to come up with something but only started to think about it yesterday. You can chew on that for awhile, too.
Posted by Unknown at 7:43 AM No comments: