Like many Jewish children, I wanted to celebrate Christmas when I was little -- strictly for the presents. While gifts were also a part of our family's Hanukkah tradition, they were doled out in what my younger self viewed as a parsimonious (I was a bright little fellow with a precocious vocabulary) fashion, only one per day. And I got stuff like: handkerchiefs. What seven-year-old carries a handkerchief, much less uses it for his snotty nose? That's what sniffling and, in a pinch, sleeves were for. My Christian friends received seemingly endless quantities of toys, games, bikes and motorized scooters, ski trips... goyim gift-getting overstuffed like a deli sandwich piled high with corned beef between two slices of irony. I wanted in. 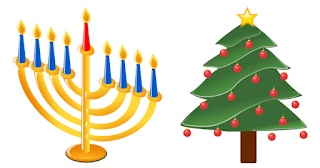 I grew up in a reform (i.e., not so much "observant" as "nodding familiarity with") Jewish family, a sibling-free child of a Jewish mother and born-Christian-but-converted-to-Judaism-under-pressure-from-her-family father. When I entered elementary school our neighborhood had a substantial Jewish population. I recall at least a quarter of my classmates being Jewish; there were enough that most classes went into a holding pattern during the celebrations of Rosh Hashanah and Yom Kippur since so many students were absent. I used to stay out for the first day of Rosh Hashanah but then plead to come in on the second since school was so much fun. Lots of arts and crafts, extended recess, no homework -- much more education-casual than the norm. But midway through 5th grade we moved, and within my new school district there was a mere handful of Jewish families. In a high school with over two thousand students there were, to the best of my knowledge, less than a dozen Jews. "Excused absences" for the Jewish holidays meant a frantic effort to catch up on missed assignments, make-up tests, and the need to answer the same questions from my classmates every year: "Where were you?" -- "What holiday is that?" -- "Why can't you eat?" -- "Where's your beanie?" A priest offered an invocation at my high school commencement, blessing all the graduates and their families "in the name of Our Lord and Savior, Jesus Christ." Hmm, I hadn't met this Christ fellow.

As I've gotten older I've become even less observant. My religiosity is akin to Elizabeth Warren's take on her purported Native American heritage: "I grew up with these stories about my family and always assumed they were true." I haven't been to temple for many years and usually lose track of when the Jewish holidays come around each year. As I type this I know we're in the middle of Hanukkah but I'm not sure which night. As mentioned here, my wife and I are in a mixed marriage (she is level-headed and I am not), and neither of us did much in the way of introducing our son to either or, for that matter, any religion. My feelings about faith and organized religion are too complex to articulate here but I will say, even as someone who hasn't attended synagogue in a long time, I still identify with that part of my background. I don't trot out the "I'm Jewish! How dare you?!" card when convenient, but maintain sensitivity to the challenges of a life lived as part of a minority. While nearly everyone can come up with a hyphenate as part of their self-description (African-American; mentally-challenged; differently-abled), it dismays me when people who are clearly advocating from a position of privilege or their own self-interest adopt some fabricated minority status in order to claim oppression or discrimination against them or others in their class. "White Rights"; "The War on Christmas", and "Every Word Out Of Lena Dunham's Mouth Is Pure Genius" are examples; there is no more a war on Christmas today than there is peace in Iraq. And even within legitimate minority communities, there are those who seek to absolve themselves of any personal responsibility for their status or (in)actions through some other fractional distinction. It would be like me claiming I was "present-deprived" as a kid because of my "Christmas-negative" status.

But I digress (did I mention I'm also "attention-deficient"?). Besides the handkerchiefs, I also recall receiving Hanukkah gifts including:

I'd like to believe I've grown up into a generous person -- not extravagant by any means, but not anywhere near as stingy or misdirected as my parents were when it comes to giving gifts. Certainly our family is quite fortunate in that there's nothing we need, and little we want. At this time of year, it seems more appropriate to be focused with what we can give to and do for others and not at all concerned with what we may receive.

There's really only one thing I ask: if someone could point me toward where I can get a decent corned beef sandwich up here in the middle of Maine... I mean, I've heard even Jesus grew up in a kosher household.
Posted by Unknown at 5:02 PM