The Proust Is In The Pudding

I'm very flattered to have been invited by the editors at Vanity Fair magazine to be featured in an upcoming issue's "Proust Questionnaire," a venerated feature on the last page where notables in the arts respond to a series of questions first made popular through responses from the renowned writer Marcel Proust. Such prominence in the magazine is a clear indicator that the individual being featured has "made it" in their field.

One slight correction to the above: I should have said I *would be* very flattered to receive such an invitation from the editors... But they say in order to achieve what you want, you need to visualize it first, right? So when that invitation does come, I'll be ready to respond while the iron of celebrity is still hot (or at least lukewarm) -- as indicated by my proposed responses below:

What is your idea of perfect happiness? When someone brings me another beer before I even ask for it. ⧫ What is your greatest fear? That I'll run out of beer. ⧫ What is the trait you most deplore in yourself? My almost painful level of commitment to justice and equality for all. ⧫ What is the trait you most deplore in others? Hubris. ⧫ Which living person do you most admire? The one answering this questionnaire. ⧫ What is your greatest extravagance? A near-limitless supply of beer. ⧫ What is your current state of mind? Beer-addled. ⧫ What do you consider the most overrated virtue? Temperance. ⧫ On what occasion do you lie? On Thanksgiving, when I say the turkey was delicious and wasn't dry at all. ⧫ What do you most dislike about your appearance? The envious stares it elicits from passers-by makes me uncomfortable. ⧫ Which living person do you most despise? Any one of several bosses I've had. ⧫ What is the quality you most like in a man? Someone secure enough in his masculinity to pick up the tab for any group I'm part of without being prompted. ⧫ What is the quality you most like in a woman? Someone who demonstrates her commitment to feminism by not expecting me to pick up the check. ⧫ Which words or phrases do you most overuse? "Oh, sorry -- I seem to have left my wallet at home." ⧫ What or who is the greatest love of your life? Other than myself? ⧫ When and where were you happiest? About seven minutes ago, sitting in this chair, when someone brought me another beer. ⧫ Which talent would you most like to have? I'd like to be a faster and mor e acurate typits. ⧫ If you could change one thing about yourself, what would it be? My underwear. ⧫ What do you consider your greatest achievement? Changing my underwear while still holding on to a beer. ⧫ If you were to die and come back as a person or a thing, what would it be? Well, I've already lived as a person, so I imagine it would be as a thing. Perhaps as a cold mug of beer. ⧫ Where would you most like to live? I'd like most of me to live in the Swiss Alps, and the rest of me could stay in a timeshare in Boca. ⧫ What is your most treasured possession? I have a box full of Krugerrands buried in my backyard, 10 paces due west from... uh, never mind. ⧫ What do you regard as the lowest depth of misery? Puns. No, wait -- those are the lowest form of wit. I think the lowest depth of misery is once you get ten or fifteen feet below surface level, right when it makes your ears pop. ⧫ What is your favorite occupation? The Allied occupation of Japan is a famous one, but I wouldn't exactly call it a "favorite." ⧫ What is your most marked characteristic? My dermatologist has been keeping tabs on a suspicious-looking mole on my back. ⧫ What do you most value in your friends? The amount of cash in their wallets they are willing to part with when we are out on the town. ⧫ Who are your favorite writers? Those who will offer to write a blurb for the back cover of my next book. ⧫ Who is your hero of fiction? It's a toss-up between Archie or Spiderman. ⧫ Which historical figure do you most identify with? Kim Kardashian ⧫ Who is your hero in real life? Judge Judy, because I also like to render unfavorable decisions against people I've just met. ⧫ What are your favorite names? Rising Tide, Ballast Point, Rogue, Dogfish, Oskar Blues and, in a pinch, Budweiser. ⧫ What is it that you most dislike? When I have to wait for someone to bring me another beer. ⧫ What is your greatest regret? That I didn't come up with a better answer to the previous question. ⧫ How would you like to die? On the contrary: I'm gonna live forever. I'm gonna learn how to fly. I feel it coming together. People will see me and cry. I'm gonna make it to heaven; light up the sky like a flame. I'm gonna live forever. Baby, remember my name. (Remember, remember, remember...) ⧫ What is your motto? "Nescio si i sentio exstaticos uel ludicrum," which roughly translates as, "I don't know if I feel ecstatic or ludicrous."

If When this comes out in the magazine, do you think they'll comp me a few copies? 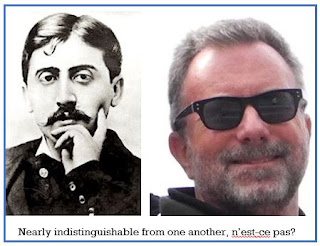