Standing on the Alleged

I've just learned that Kim Kardashian, who largely removed herself from the public eye after allegedly being robbed in Paris a few months ago, has returned to social media by posting two Instagram videos where she is allegedly shaking her "booty." 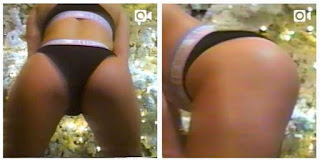 CORRECTION: Kim Kardashian has posted two Instagram videos where she is shaking her alleged "booty."

LET'S TRY ONCE MORE: Kim Kardashian has posted two Instagram videos where a "booty," allegedly hers, is being shaken.

NOPE, THAT WASN'T RIGHT EITHER: There does not appear to be any ancillary contribution to the shaking of said "booty." The shaking seems to be completely within the control of the person pictured in the videos, who may be Kim Kardashian or, it is alleged, perhaps one of her sisters, and whose "booty" is the body part in motion.

GETTING CLOSER: The Instagram videos that are alleged to show Kim Kardashian shaking her "booty" may mark her return to social media. In response to critics who claim this is a salacious re-emergence, the Kardashian camp responded that the videos were done in a tasteful manner since the "booty-shaking" appears in slow-motion, making it artistic and not at all lascivious.

HEY, NOW: I have just stumbled across a new word -- "concupiscent." That would have been a good one to use in the previous paragraph.

TO CONTINUE: There was also another picture posted on Instagram that included breasts resting upon a second "booty." As I write this, ownership of these body parts has not been firmly established, but because of the degree of concupiscence on display it is alleged all the parts are associated with at least two Kardashian family members. However, none of the parts are alleged to belong to either Kris or Caitlyn Jenner. 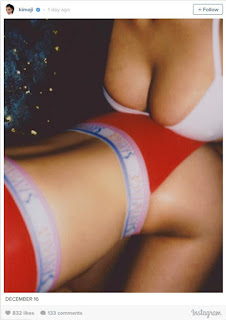 IN SUMMARY: Kim Kardashian, who is alleged to be a "famous celebrity," but is definitely someone for whom I have no use, continues to generate what I used to refer to as "fake news." Now, "fake news" is described as fiction posted online which is alleged to have influenced the outcome of the recent election and, as a result, the foundation of our democratic process has allegedly been undermined by the efforts of so-called state-sponsored "bad actors."

Speaking of "bad actors" -- that pretty much describes the Kardashians, doesn't it?

Speaking of "fiction posted online" -- that pretty much describes the T&A in these screenshots, doesn't it?

I am now nearly out of patience, allegations and quotation marks. Back to the (alleged) "real" news.
Posted by Unknown at 7:32 AM