Really in the ears (with apologies to Steely Dan)

We were making idle chit-chat during dinner with friends, and I mentioned I'd be taking my car in for its 12,000-mile service. "But you just bought that car 7 months ago!" my wife Carol exclaimed. "How does it have 12,000 miles on it already?" "Well...," I replied cautiously, "that's because I've... driven it 12,000 miles since I purchased it." Carol looked at me intently and then said, "Really?"

A host of ripostes came to mind, most of which are not suited for a family audience, so I just chose to respond with, "Yes, really," and let the matter drop. But it was the latest example of Carol offering an incredulous response to something I've said that seems quite matter-of-fact to me. Here are some other examples:
And so on. Hardly a day goes by that at some point our conversation isn't peppered with a "Really?" Checking the time, mentioning we're out of peanut butter, reviewing the evening's TV listings ("Is there a new episode of The Big Bang Theory on tonight?" -- "No, it's a rerun." -- "Really?"). Now, from Carol's perspective this is just a conversational "tic," a form of benign acknowledgement; the equivalent of saying, "Oh!" or perhaps, "I didn't realize that." But to my ears (and psyche), I interpret this as her ongoing sense of disbelief in the veracity of whatever I am telling her at that moment. I think she thinks I don't know how to tell time, or how to read, or -- in general -- how to tell my ass from a hole in the ground.

My fear is that she will provide that same response when I need her to take immediate action related to an urgent request -- such as:
Now if I were to invite Carol to comment here, she'd likely say I'm exaggerating; stop it; I'm being ridiculous; of course she would attend to any medical emergency just as soon as she finished scrolling through the latest posts on her Facebook page.

I suppose I should be fair here. I imagine I have a behavioral tic, maybe even two, of my own that get under Carol's skin. For example, I... uh, let's see -- sometimes when I... hmm; nothing is coming to mind off the top of my head. As a matter of fact, as a result of this thought exercise I've come to the conclusion that I'm pretty damn terrific and Carol's lucky to have me as her husband, and I plan to tell her that. But I already know what her response will be: 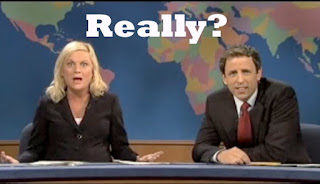